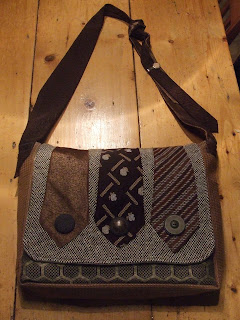 My brother Ken was quite a character. He was smart, but as a young student, he drove his teachers crazy. His report cards would read that Ken was smart, and capable, but "needed to apply himself". 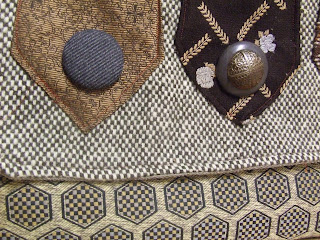 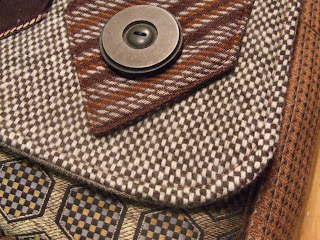 Ken took the "Four Year Extended" high school program. (in Manitoba high school is three years- grades 10 through 12) His first time through grade twelve (or was it eleven?) was a bit of a liquid and chemical blur for him, and if he were around to tell the tale, I'd like to hear it again. His story. His sadnesses and his reasons.

But all I have now is my own remembrances, which may be somewhat inaccurate.
Anyhoo, after his not-so-academic year, my dad had some sort of pow wow with ken and informed him that education is a privelege and not a right and that if Ken intended to go to school and waste the teachers' time, he should quit school and go slog it out in the real world.

Here's where the other aspects of Ken's character began to shine- "Strength of mind; honesty, sincerity, courage, and other good qualities taken together". His low german words to my dad were: "Dout voah ek de viesse" (I'll show you.) 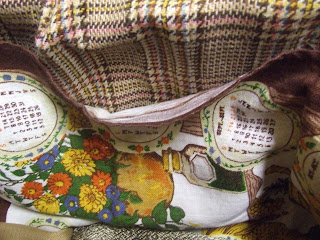 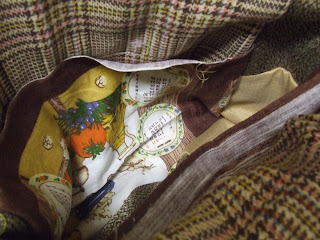 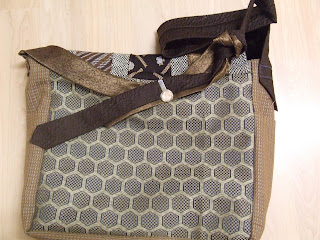 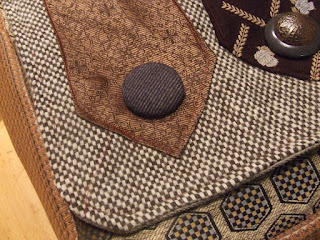 Here was a whole new way to prove dad wrong! and he did it well.
He went from the four year high school program to University where he completed a degree in law. From there he entered a promising career in restorative justice with the First Nations People. 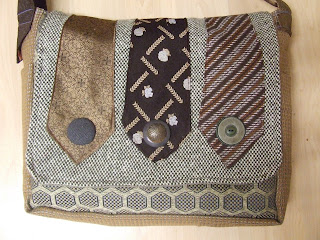 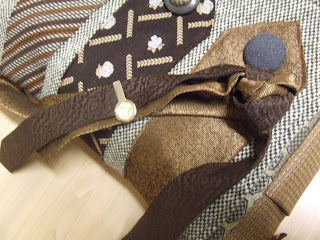 The bag: Although I didn't personally know Ken as a necktie kinda guy, I know he must have worn them and looked like a million bucks during his professional career years. We actually lived in different provinces for many years and I have no personal memories to draw upon. Judging from his rugged handsomeness and the way he could pull off the vest look; I think its safe to assume that he looked really stellar in a necktie as well.

The straps are also neckties, and as a bonus I threw in a tie clip that came with a random collection of thrift shop buttons. You'll need the tie clip because these straps came out really long- a risk of not using a pattern and re-using neckties. These guys have really long necks.....?

The fabrics come from: a skirt pilfered from the dress-up trunk. Neckties from my growing collection. Mr Aristocratic Upholstery Guy. And a calendar tea towel for the inside pockets. I used the calendar to suggest the passage of time and to urge people to live purposefully. It doesn't matter what stage of life you are currently in. There is a hole the shape of YOU in our society and using your very own quirks and compulsions and passions, only YOU can fill it. Don't wait for permission and don't force yourself to volunteer for something you already dread the thought of. 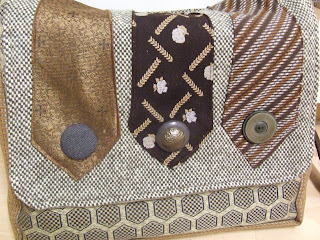 Character: "One's nature, or the way a person really is, inside his mind. The ways you think, feel, and act make up your character. If you do good things and have good thoughts and feelings toward others, you are a person of good character." (children's illustrated dictionary)

That could have been my report card but like Ken, I survived the system and actually became part of the system... scary.

And Joyce, I'm not kidding when I say "the cheque is in the mail."

Did I mention that I once made a vest out of ties?

(Also, I've been appreciating these tributes...)

Already I'm out of the game. This bag is nutso amazing. I LOVE it. I WANT it. Man budgets suck!

Your creativity is amazing Joyce and I so enjoy your tributes to Ken. THis bag is so great $75

Beautiful bag. I'm going to dare to post $95, fully expecting someone will trump me, but hopeful none the less.

Ohhhh I love the fabrics and textures on this one Joyce! MMMMM brown....

I love this bag.... I hope who ever gets the bag loves it as much as I do! (I am sure they will because it is beautiful). The bidding has just gotten a little too high for me. Maybe another one!!!

I want it sooo bad, but I forgot to ask my hubby about it and now he's gone....I guess I shouldn't blow the imaginary budget...

Looks like it's you, KH. Send us an email at brijoy@mts.net and we'll talk about getting you the bag.

oh my gosh, this one is also gorgeous! I have the feeling that all of the bags this week will be special. :)