Cast Your cares Away 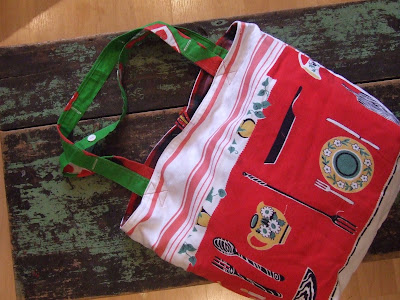 A few years ago, Brian and I were at an auction sale bidding on one of those boxesfullastuff cuz you want the one good thing in it. Today I have no idea what that thing was. But what I do know is that we were bidding against a conservative looking little old lady and i wondered what on earth she wanted in that box.

Now I know that it was that cast iron pan. 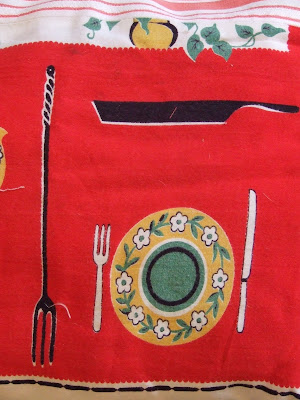 Of all the strange and mysterious items that have come into my possession over the years; I wonder how I managed without that cast iron pan.
(you should get one). Or....you could get yourself a sweet tote bag depicting an image of that pan. That's going to be way more time efficient than trying to find an auction sale selling a for real cast iron pan. I'm doing you a favour in a way. 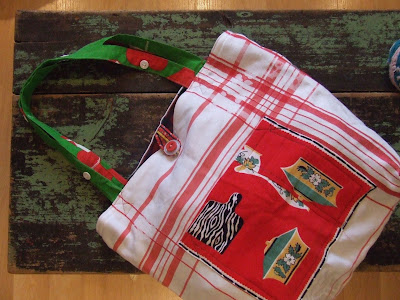 This tote is actually constructed from: two tablecloths; one pillowslip; a red plaid remnant; and the bottom of a red and rickrack skirt. 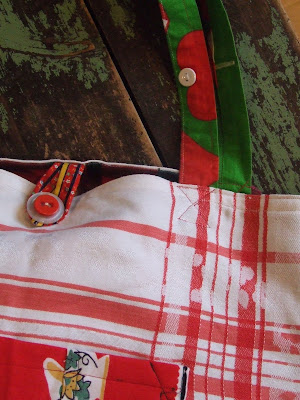 It buttons closed on the top, and could be considered reversible. 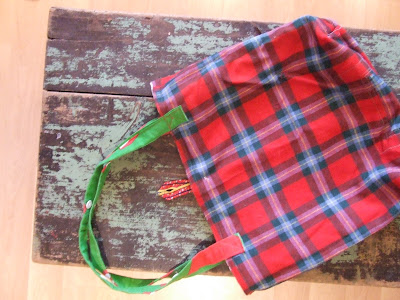 These are photos of the "inside" of the bag. (that could also serve as its outside, if you so desire.) 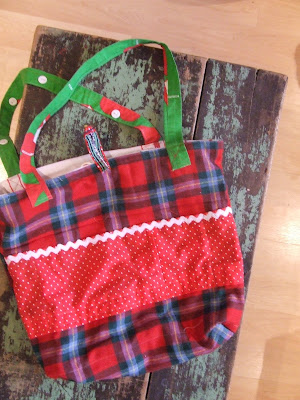 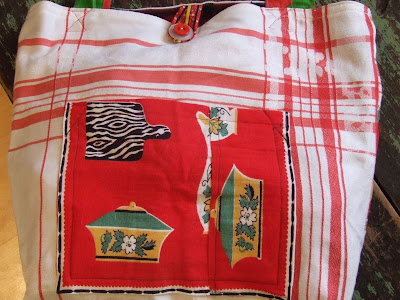 I really love that tablecloth with all those kitchen pots and things on it. I've hoarded it for some years now, but can't use it as an actual tablecloth. It's too small, and besides. Have you ever tried using a tablecloth whilst feeding five or six small children? Masochism, that's what that is.
Who wants to start us off at $25- Cdn? All that money would go straight to the World Food Program. Apparently things in Darfur are looking more grim than ever. To be honest, I can't bring myself to follow it too closely because its that depressing and worrisome.
Anyhoo. This auction remains open until 9:30 pm cst, Tuesday, October 6, 2009.
Posted by joyce at 6:29 AM

I think I got the bag?? Cautiously optimistic.....If so, I have to say that this is the best thing that happened to me all day, which started with my garage being broken for the second time in four days, a toddler peeing 18 inches away from the potty, kids squabbling, dishwasher inexplicably heating when not in use, garbage bag breaking, husband away....you get the picture. woohoo! ~Colleen

oh, that is bad. That is the kind of day when you wonder if you are the only adult remaining in the world...

Yes, you got it. If you are the Colleen yant zeed; you will also save on zero shipping. (going there on Monday) If you are not then please excuse me. Send me an e-mail so I don't send the bag to the wrong Colleen!