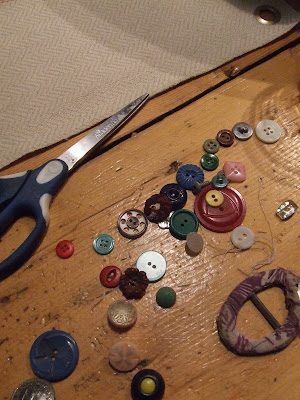 Is anybody out there good at putting together some words for a brochure to have on my table at the upcoming fundraiser? I would like it to combine the following elements:

(got it, thank you JayP)

Anybody else in my general area who is interested in a naiy frein? (gee, that Low German never did get put into a written language. I have no clue how to spell that).

Here's my own dictionary, then.
naiy frein: literal translation; sewing gathering. Its most base interpretation would be a close cousin to the "stich 'n' bitch". But closer in sincerity to the "Bible coffee" of my upbringing.

I'm thinking... Tuesday, April 6. Yes, that's very soon. That's how I roll. Here are some things that are rolling around in my head:

If all you're capable of doing is the latter portion of the stitch 'n'....... Well, as long as you're cheerful and are capable of making coffee; we'll take you too. Just wanna come hang out? maybe play the wii? whateva. You can totally do that too.

One other question: Does anyone have access to an easel to hold a large-ish framed article? (good, got it, thank you Ginny Go Go)

Second question: Anyone in my area who is great with kids and wants to sub for three kids on Friday at my house?

Leave me a note, if you have some ideas or a hankering to come fondle my hankies.
peace out.

when is said event occurring? i would love to come! i'm no good at coffee, and I'm hopeless with a sewing machine, though i'd be forever indebted to the person who lets me take my first baby steps toward knowing how. but i do know how to put words together, and would happily do so.

I'm not so good with words, nor sewing, nor making coffee BUT I will be there to do what little I can. What time do you want us to arrive?
Lisa

if you are needing the easle for a brandon event.
I have a large one - that is currently displaying a large framed image of a certain heritage home that has less and less meaning. it is disguising a pump and softener in the not so charming basement.
dare I say, yours for the keeping!
Boler

yay! yes, please Ginny.
And I'm trying to be in Brandon on friday and saturday. Hope you have some time? Prolly sleeping at Rosa's . I hear she got horses. Must see.

I would LOVE to be there. If only I lived closer or it was closer to our cousin fest time. And the beauty that's still waiting there for me........... Put it in the sale. I'll pay you when I see you.

Joyce - what time are you getting together tomorrow?

Boooooooo. i'm so sad i can't be there.

I can not help during the week.

I can sew. I can trim. I can stuff paper....but I can not help during the week. I CAN come to Brandon to do anything you need.

I know someone that can schmatlz a brochure together and I could run them off at work at cost.

You guys are peachy. I'll take you any time after 6:30 tonight. I've got JP on the brochures, and Ginny with an easel.

fancy- should I say yes to your offer? seems sacreligious somehow to take back something like that. Let me see how far I get on my pile, and then I'll let you know. do come to the Darfur production and introduce yourself,kay?

thanks, Laura. You should be here with me, you know. All those other selfish sisters are off in Rome. hmmmmmph.

Karla- that single parenting excuse is getting OLD, you know.

ok. off to cut out a few more bags!

Would love to help and meet you. Wish I lived closer. - Lori

Jenni- I should have e-mailed you with more info, i'm sorry. I would love to show you how to operate a sewing machine, let's set it up.

Thanks for the insight! There is a lot of helpful information within those links.