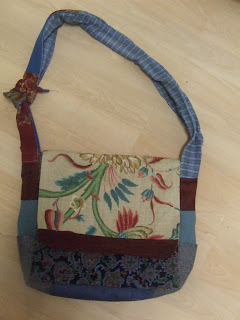 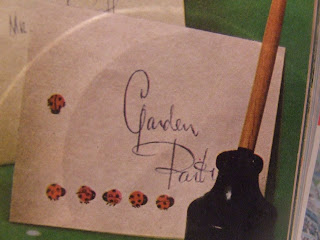 Okay, I think it's later now. (9:00-ish). Time for my breakfast, now that the multitudes have been fed. My third cup of coffee,( nuked ) because in the hours since 5:45 its gotten a tad cold. Still have not found my sewing sheers, so the straps were completed using my kitchen scissors. Not so sharp. Not unlike how my brain has felt in the last few days. Still, the dull brain and the inferior scissors managed to finish a bag in time for another day.

Today's label is compliments of the 1954 McCalls Bazaar Book. Although it looks like a toilet plunger beside the Garden Party invitation; it is actually an ink well. 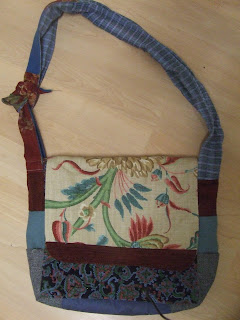 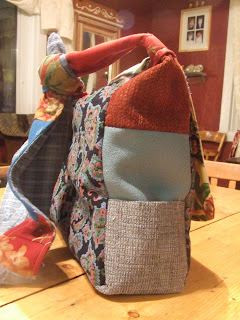 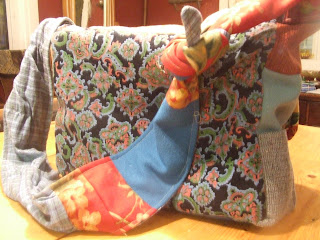 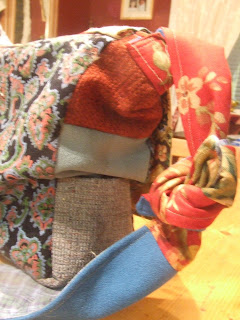 Garden Party. Fitting because of the casual blend of class and function. And the fabulous flowers, all in turqoise, green, burgandy, blue, and gold. The word "party" caught my eye as well, as my annual party bonanza should be right around the corner. Last year was the now infamous Cougar party, followed by the newsworthy Ugly Sweater Party.

This year? Who knows?! 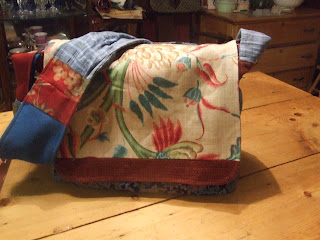 (inside pockets are a dotted kitchen apron) 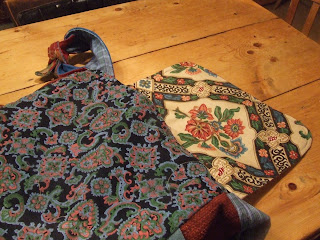 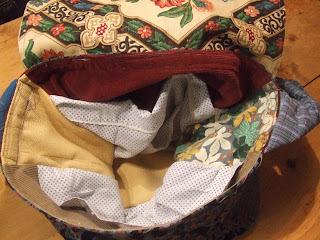 I wish someone who is good at re-setting the lighting/colour on this dang camera would come over and help me. The bags just don't seem to look quite right in the photos these days. I don't know if its because of the absence of morning light, or the fact that my kids love photography and fiddling with settings.

Sometimes when you double click on an image you can see the subtleties better. So if you are considering blowing a wad on one of these do-gooder bags; try that little trick. 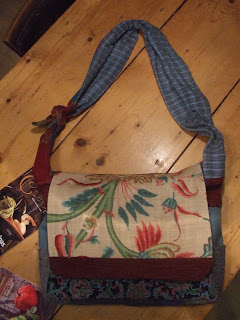 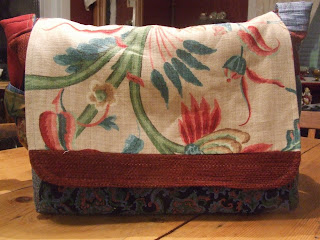 The front flap fabric is prettier than it appears in these photos. Darnitanyway. 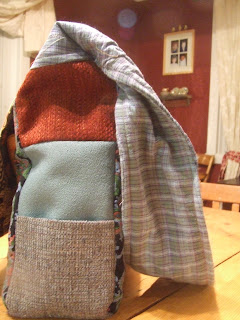 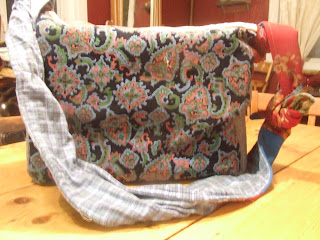 The plaid portion of the shoulder strap is a major trip down nostalgia lane. When Arianna was a toddler and I was big-time into making children's clothing, I used to puruse the discounted bolts at Fabricland with fanatical intensity. One day I found that blue and green plaid and told my friends Rose and Patti about it. We bought it all, and clothed our children in it, hid our tv's behind it, and generally went zonkers with it. I'm still not tired of it.
So, there you have it. Better late than never.
Come around all day, and if you want to play, leave a name and a number up to and including 8 pm, cst.
Posted by joyce at 7:22 AM

Just the right blend of class and casual.

I think the pictures look great. Looks like another great bag as usual. tk

Hi Joyce.
$65 and the crazy just keeps going.
off to work, so doubt this will
'hold' until cut off.
saw the loveliest old sheets at MCC self help... and thought of you.
I think the nicest thing is happening, I am starting to look at fabrics more and more.
Could never do what you do.. but perhaps you're teaching me to push the envelope a bit!
thanks!
Boler B.

hmmm..I've been looking at this bag today trying to decide to bid or not. Been checking in with this site now and again. I love ric rac baby from a few months ago. Too bad I wasn't checking the site then! This one has some similar blues. Better decide soon....
Simons

hey, Simons. If you loved ric rack baby, you could always hold out and hope that I make one more similar, as I still have some of those fabrics.

ooo well hmmmm (again) that's tantalizing what you said. perhaps I'll hold out and hope for a while then. That works out well for Boler B as well. Hard one to leave behind tho....
Simons

Shock!
Just home from work and of course a zoom to the store, and a flash of nostalgia... for some reason I went down 11th...
no glowing lights in either home...
so what a lovely surprise!
I was thinking niece Jenny or daughter H...
and thanks Simon... the 'right ric rack' will no doubt come along...
(you know Joyce, there is always that question.. should I bid? what if I get? what if i then like tomorrow's even more? oh you have us all hooked!)
smile smile smile
B.B.