So, a Funny Thing Happened.....(now with pictures)

.... I was working on this kick-ass bag, and it was looking pretty dang fine. I put the lining together, then the exterior, then put the two together.......

Super crooked like. So that you'd have to tilt your head severely to one side, squeeze your right buttocks and left eye, and be partially blind in order to perceive an equalateral type handbag.

Just not gonna cut it.

Although I did. I took it apart, measured bits, trimmed parts, and sewed it back together.

And.......It was crooked. So crooked that.... darnit I used up all my best imaginators on the first bit.
Sure, I had measured the bits. But not the right bit got measured; and somehow the side panel was wonky. The more I tried to wight the wonk, the weirder it got looking. Downright ugly to my eye because I'd worked the dang thing too hard already. 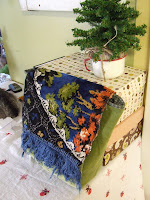 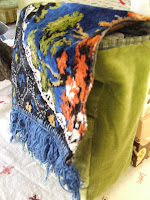 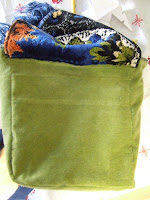 (here are the pictures- oh curious ones.)
See- the front looks like its got pretty hot potential.
Then you look at the back of it and what do you see? On the right side; a perfectly square corner. On the left.... a total swoop. Cul-de-sac. Suburban type bay. What are you going to do with your rectangular wallet in a bag like that? You'd have to custom order a wallet that swooped on one side and cornered on the other; and that's just excessive.

So, if you see me pass you by on the street, and I happen to have a mossy green velveteen shoulder bag that is a little wonkier and wider on one side than on the other.... Well, then you'll know what you missed. Or.... if you stop by my house tonight after basketball, you'll see something nearly identical getting sticheroo-ed. It's like an itch I have to scratch; that velveteen bag. And so far, it looks like its turning out to be less hooooo-ville than yesterday's. I imagine it has a little something to do with the fact that I found the correct, measured side panel piece under the couch. hmmmmm.... so I guess using a random scrap that was similar but oh, so different caused that little bag glitch. 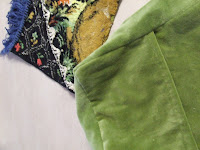 So, I'll have to say "See you on Friday, because Thursday kinda got messed up".
I'll be a sort of deja vous. But not as wonky.
Posted by joyce at 9:15 PM

You could call it an abstract? But I think you should post a picture anyways.

Joyce, you know we all want to see it!

To err is human, and we appreciate your sharing, so send us a pic of your blooper!
my verification is ADOUREAT

Well I don't know about anyone else, but I love the colours, very pretty & it looks fine to me, thanks for showing it to us.

what a load of crap! the bag looks FINE! you just wanted to keep it for yourself. selfish susie!