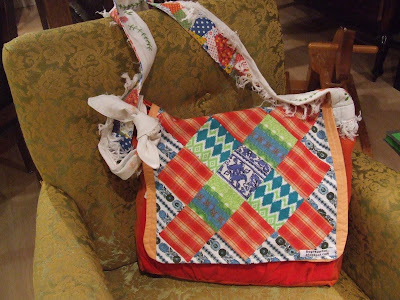 So much to say.
Some mornings I struggle a little with the titles of these posts. This morning it was a toss-up between three possibilities. I settled on "Fatima" because of something remarkable that happened earlier on this week, which I will soon expound on.

The two other possibilities had to do with a relatively new commenter named "Janice" and my almost seven year old son Sam. 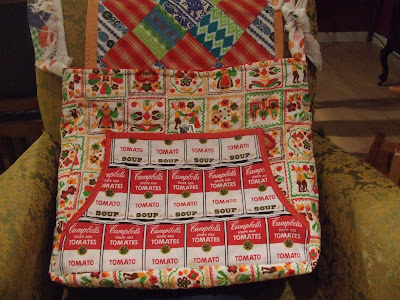 (bag turned inside out- this is a Campbells soup bib apron turned pocket.) 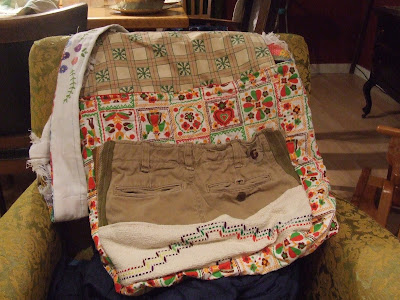 I'll start with Sam. Now, I had a son born to me almost five years before my Sam joined our family. This first son saw most clothes as uncomfortable, flashy, stress-provoking evils associated with life on this earth.

When Sam came along, it was a different story. He liked choosing clothes in the store. I remember seeing him as a toddler holding up a hanger in a store and making happy noises. This was altogether new for me. 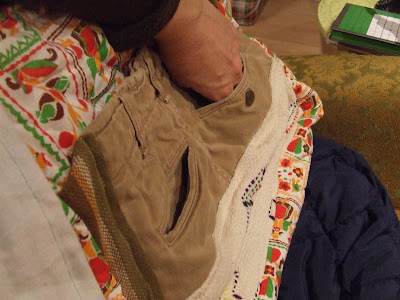 The other pocket(s) inside this bag are a pair of Sam's pants; re purposed.
They are actually hand-me-downs from a Darfur supporter whose son loved watching the bag action online. They passed down some of his clothes for the project, but they were just about the right size to wear on Sam first; and then make it into a bag. So, that's what we did.

Last night I photographed this bag, and had it slung over a chair, inside out- just like the above photo indicates. Then I came into the office and busied myself getting said photos onto the computer.

Sam came to me weeping.

It was a sad cry, and not his more typical mad cry.

He was sad about those pants. Mommy- why did you make my pants into a bag?!
(I soon realised that he thought these were his current brown pants, and that I'd taken them out of his drawer and sacrificed them to the greater good) 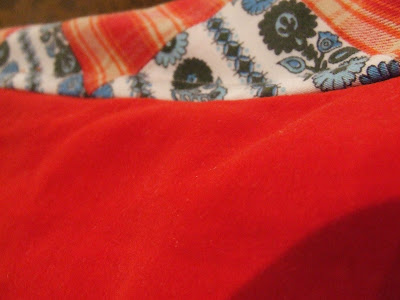 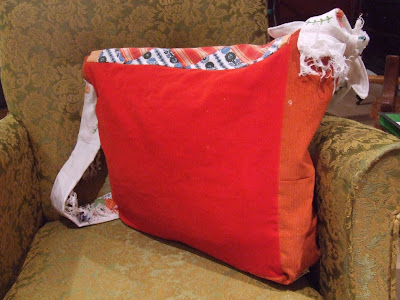 "Bright is in"- that's what Janice said.
She came here in the most serendipitous way. After the privelege of hearing Mariatu speak in the flesh, she went home and googled her name.
And came here. 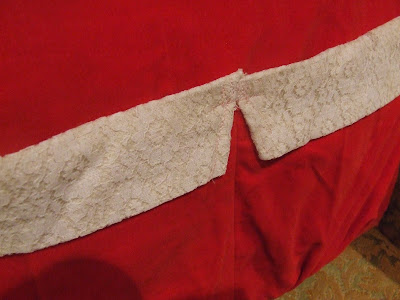 And has delighted me since.
(this is under the flap: do you see that the two pockets are actually the bottoms of two sleeves on what I imagine is a child's Christmas dress?) The white lace forms the cuffs of the sleeves. Reminds me of photos of my sister and I dressed matchy matchy at Christmas time. 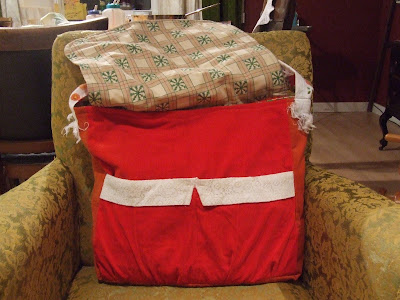 Now about Fatima. I had the awesome privelege of sitting in on the local MCC thrift store's annual meeting earlier on this week. I was duly impressed with their work in clothing and feeding people worldwide- it really looked like Jesus to me. 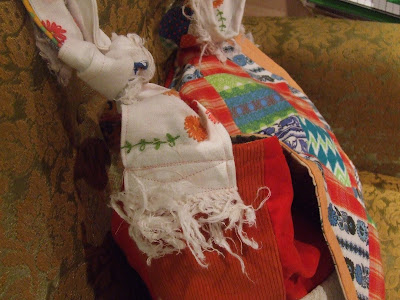 There was a guest speaker whose work involved operating a central Canadian warehouse from which goods are circulated worldwide. He shared powerpoint photos of baled clothing and quilts and then some of their destinations. 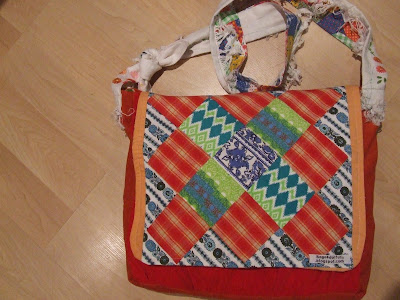 I got sort of breathless when he began to show photos of distribution in the Darfur region of Sudan!!!!! 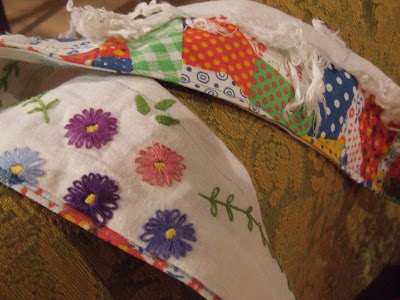 (a note about the straps: one side is a pretend patchwork scrap that I just had to keep. It was small, but I knew it would be perfect for something; and here it is. The other side of the strap is embroidered in flowers that I sat up all night stiching. Not. They really are embroidered, by hand I think I can safely assume. They did adorn a tablecloth in their other life.) 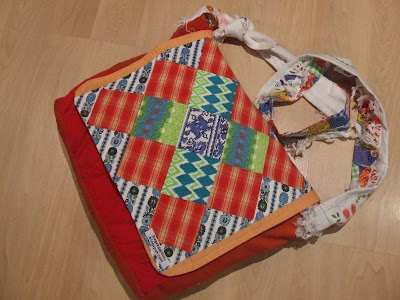 He shared a photo of a woman named Fatima. She was standing in a displaced persons camp, accepting a quilt sewn in the back rooms of some Canadian (Manitoban? Nivervillian?!) thrift shop. (our local thrift shop produces 500 to 600 quilts annually!)
~
It was bright and colourful. And she was grateful to receive something so beautiful.
~
When asked what she was planning to use her quilt for; she told our speaker that it was going to become her infant's bed. When asked where the infant currently slept, she explained that she made him a bed in the sand.
~
Fatima is one of us. She's not someone far away who looks great in photos with a donated quilt and makes us feel comfortable with our contributions to the "lesser". I think that's a pit easily fallen into. I often forget the Fatimas when I'm sewing stuff together in my basement with fifty million toys on the floor, a couple of toddlers, a warm furnace, and fat on my bones. And yes. Sometimes the sewing is measured in comments. Or readers. Or followers. Stats.
~
We are a greedy and selfish nation. (now you're starting to think: geez, here comes the fire and brimstone, and a lion's share of guilt). I think I'll ease off here.
~Particulars~
LARGE. 16" wide and 14" deep.
The lining is made of a thin quilted material. It wouldn't exactly protect a laptop, but it would help. This bag is also practical for: people who carry a lot of stuff, or binders, or small children. Even a mid-sized dog.
Bids begin at $25- Cdn, and the auction concludes at 9:30 pm, central standard time; Thursday, November 19, 2009.
Comments are always free.
Posted by joyce at 6:06 PM

One day, when life inspires you to make extra bags, you should open an Etsy shop with fixed prices. Never give up this though -- the bidding is addictive. *laughs*

Oh WOW, my quilt. Maybe I can get two with one mailing!

I have been to Africa, India, Brazil . . . and seen Mothers put their children to bed on cardboard. We are blessed.

inspirational Joyce your words and your needlework
(well, and you)

Women's handbags look simple and pretty when they are designer made. I prefer this kind of bags for my use. They have stylish look as well.