Yeah.... So, I've got a bit of a necktie thing going on right now. My original plan was to make a bag with a bit of a hippy feel to it to celebrate some of Ken's less conventional ways, but once my hands got a feel for all those glorious neckties; I just kinda kept at it. Slightly ironic; since I don't exactly think of Ken as a necktie guy. But these ties are unusual and extraordinary and that's what makes them worthy of celebrating this man whom I didn't know nearly well enough. 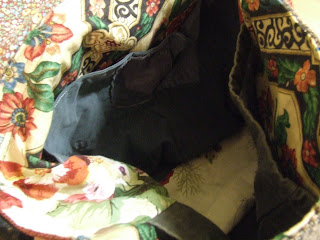 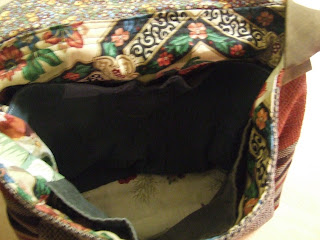 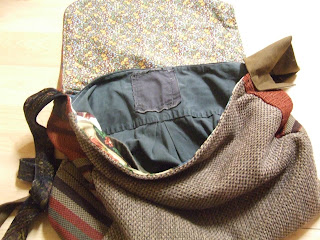 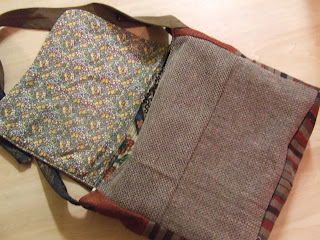 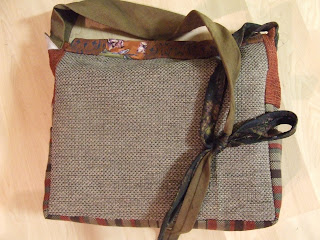 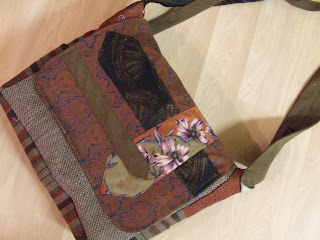 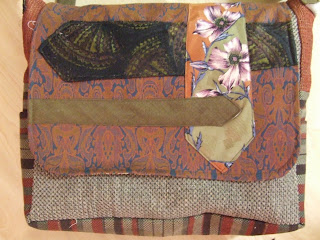 This bag ought to travel many a fair mile. The body is made up of sturdy upholstery fabrics; the lining and flap face come from Mr High End Sample Guy; and the straps are...... neckties, of course. 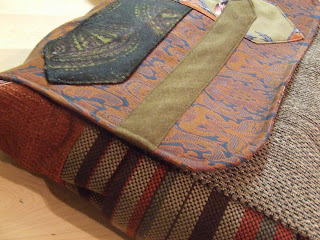 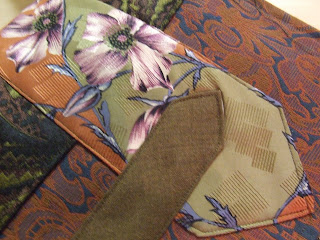 Hidden in the side panels are two slim pockets. Two more pockets are on the inside.
It's Friday, and I imagine that if Ken were around, he would be looking forward to a neighbourhood backyard fire with kids running around and adults winding down with some refreshments of choice.
So, if you're hanging out with friends tonight; tie one on and think of Ken.
bids until 8 pm, cst.
**
*On reviewing the original meaning of "tie one on"; I am feeling mildly uncomfortable with the bag's title. But I really like the bag's title because its about the tie, and it does conjure up images of relaxing with friends. So, here's a disclaimer: I'm not suggesting that its wise to literally "tie one on" (ie, drink your face off without discretion, limits, or responsibility). when I say "tie one on and think of Ken; what I mean is that as you are enjoying your Friday, and possibly spending time in relationship with people you love, think of the beauty and fragility in that, and celebrate it.~
~
Sober-like. or at least sober-ish-like.
~
So there you have it. Friends don't let friends drink and drive, is I think, the catchy phrase.
Posted by joyce at 6:39 AM

The name alone made me bid! I like your current tie indulgence.

I'll definitley be "tieing" one on tonight - me and Elton, I'll be in the 5th row.

I will be seeing Sir Elton myself tomorrow! Cannot wait!

Oops - dahhhhhhh ! Forgot to include my bid with my earlier comment. $50

Not seeing Elton tonight, but saw him in concert before. He is awesome! I would love to see him again! I did see The Blue Man Group last night. They were great! I bid $55 and will "Tie one On" tonight spending time with my kids! I hope one of these days I get one of these great bags!
Anna

Another beautiful bag Joyce, for a seemingly beautiful man......MK

Well I am still sad that I didn't get the bag from yesterday :( and forgot to check in again... but life will go on and I will bid o whoppin $65 for this beauty!