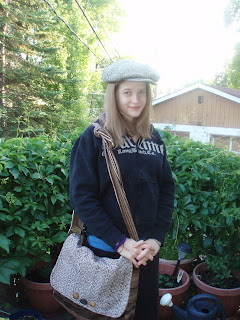 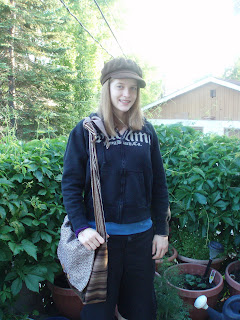 Grad gift. Somebody has a sister who loves her very much.
This bag was purchased shortly after the hype in the Winnipeg Free Press. It was tough to snag a bag sometimes, so sister to that cutie above used two computers to stay on top of who was bidding when.
She also told me a great story about that adorable hat. Apparently our grad here saw the hat on an elderly gentleman at Tim Hortons and purchased it off the old fella's noggin.
I like that kind of pluck.


Have Bag Will Travel 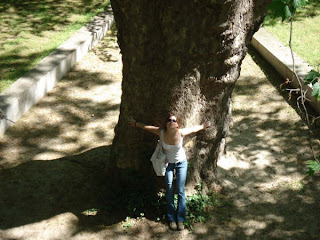 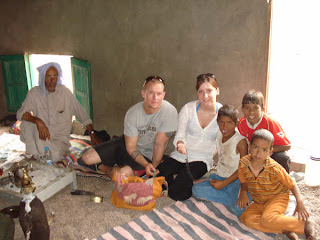 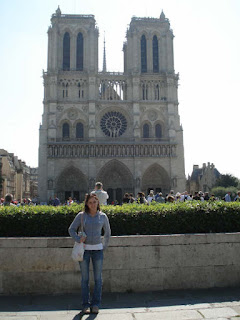 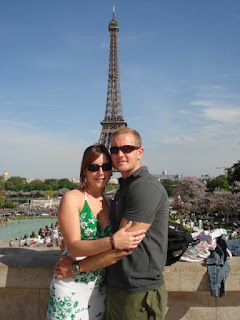 If you look closely, or click on the image to enlarge it, you will see two bags that have travelled great lengths. The white, pink, and slightly greenish one is in the Paris pics. On the Egypt picture, you will see a bag with embroidered elephants laying on the ground beside its owner.
That one is pretty amazing. I bought that fabric as a dress at Global Connections at the Forks many years ago and wore it while gestating one, two , or three kids. Who knows where that fabric was originally produced. After living a humble life in Brandon, Manitoba, it went on to be reincarnated into a shoulder bag and live its second life travelling the likes of Dahab, Egypt.

I'd submit a picture of my bag's travel, but one day trip to Grand Forks probably isn't blog-worthy even if I had bothered bringing a camera.

yeah, well I beg to differ.
I think you should submit a picture of you grocery shoppng with your bag, your gnome, and your son passing by the seafood department at the local grocery store. That'll make Dahab look like a cakewalk.

Really enjoyed the bags and comments - hope you come back soon so I can get a bag.

Loretta- I am still here.
Probably back in the saddle for Monday, in fact.

My Re-joyce bag enjoys geocaching and yoga, but hasn't yet been outside of BC.

I even took some pics of me trekking through the bushes with it and was planning on sending them to you, unsolicited. But then I deleted ALL the pics off my camera accidentally and decided it was a sign.

At the petting farm last week a calf tried to eat the straps off my bag...does that count as an adventure? This week we settled for a smoked goldeye, but he still wanted that darn rainbow trout.

My bag has been through 4 provinces. It had a wonderful time.
Alice

ah, It is so wonderful to know the bits of stories... of origins, of current journeys. It reminds me of my old rolling pins, and I love to think about the miles of pastry... the prairie kitchens they have seen.
Your bags are like the past, well made things meant to be kept, treasured, and passed on.
Well done Joyce!!
Lory

I know there is one in Burundi, Africa, sent one out there to a friend in summer....but don't have a pic....

yes Sheila, and I have those glorious Barundi fabrics from you yet to enjoy. My eyes fall on them, and I have not forgotten!