Good morning, Darfur supporters. The batteries on my camera need some time to recharge, so in the meantime, here is the information for a documentary film showing in Winnipeg next week, for anybody who lives around here. 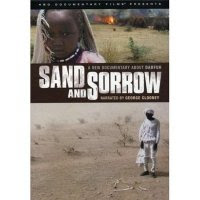 Description
Come join us for the Winnipeg premier of the HBO Documentary Sand and Sorrow produced and narrated by George Clooney. This documentary looks at the history of the conflict and the international communities "Legacy of Failure" when responding to genocide.The documentary contains interviews with Darfur activists Samatha Power, John Prendergast, Eric Reeves, Holocaust Survivor Dr. Elie Wiesel and President Barack ObamaTickets will be $5 at the door!

**Plus come out and enjoy a cup of locally roasted, fair trade, organic coffee provided by Greenbean Coffee Imports, more information about them can be found here http://www.greenbeancoffeeimports.com/
** all the above information was copied and pasted from facebook.
Posted by joyce at 7:58 AM