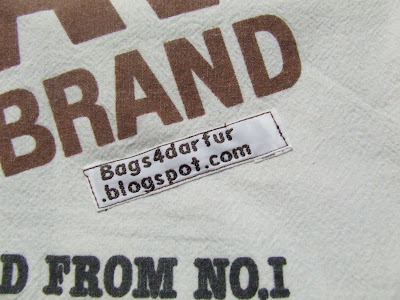 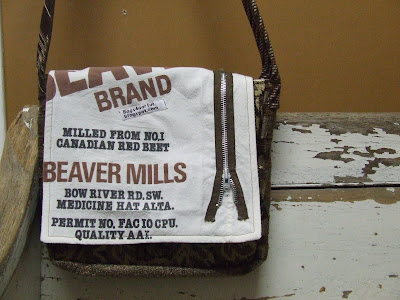 A curious thing happens every summer- mysterious intruders enter our garage and pile all sorts of things up to the point that it becomes impossible to park a vehicle in that space. And we're not talking about a little garage here.

So every autumn when the cold winds blow in and the threat of ice and snow hangs in the air- well, it becomes prudent to beat back the space invaders and make room for the family van.

Well, there happened to be a number of containers of fabric in there. (mysterious. fabric. here.) And in my efforts to weed through them, I found an impressive stack that I wanted to see inside my house for a while. 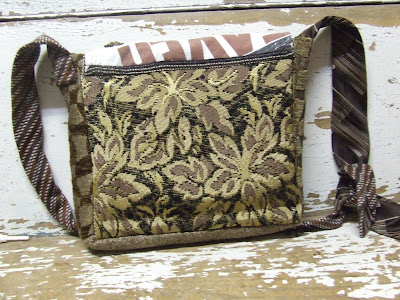 All this leeched into an unplanned re-tidying and stacking event in my sewing room.
Which further led into me rediscovering some pieces that bring me pleasure.

One was a paper bag filled with all sorts, styles, and lengths of zippers. Now, I don't feel that fond about sewing zippers in the traditional way, but I can certainly see their value as an accessory. I love the effect on the flap of this bag.

Another was a pair of nasty looking knickers made from a mill bag replica. I think people actually wore those as shorts back in the day before full length mirrors. 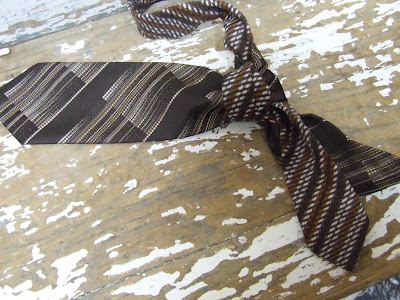 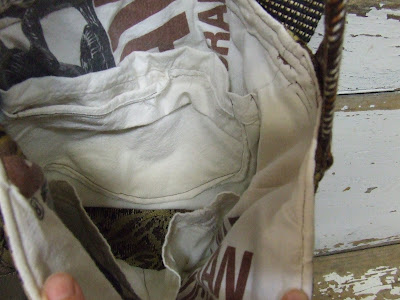 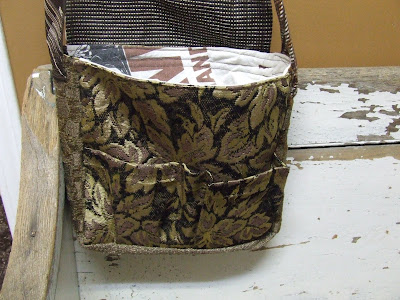 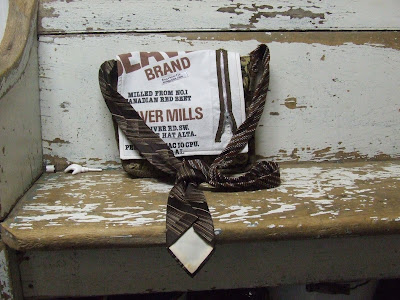 I myself much prefer the words and large pictures of beavers on a shoulder bag. Not so much on the lower extremities of humanity.
But that's just me. 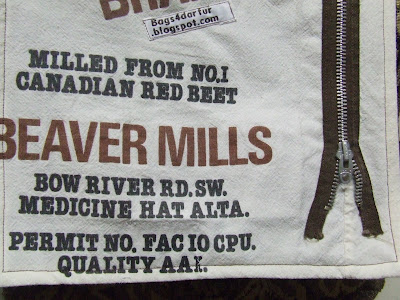 I also happen to have a particular fondness for Medicine Hat, Alberta.
Aside from the admirable milling of red beets, it also produced an impressive batch of nieces and nephews, thanks to my sister Laura. (well, if you want to get technical, it was west of Medicine Hat in a town called Bow Island, which is no where near any body of water whatsoever.)
Particulars:
Medium sized; ~11" x 9".
Shoulder straps are two neckties that appear to be cotton/poly. Not silk or wool. That makes them more washer friendly.
Pockets: Under the flap you'll find three compartments: one for your pen (I constantly misplace mine, then find 14 hundred of them at the dead bottom of my bag some months later)
And then two other pockets that I designed so that they are not flat up against the bag. That'll make them more user-friendly, I think.
Inside pockets: two smallish ones on the one side.
One large pocket on the other side, plus one small one. The small one is the inside pocket of the Nasty Knickers, upcycled.
Bag materials: upholstery fabric exterior. Should last longer than most of the couches ever have in my . daycare cirque du soliel.
~
Questions, comments, salutations and bids are most welcome in the comment box. Bids will begin at $25.00 Cdn and the auction will close at 9:30 pm, cst, today- .
Errr.... make that today, October 27, 2009.
And they wonder why I didn't make a living as an accountant.
hmmmph.
Posted by joyce at 6:35 AM

I can't believe nobody bid on this little beauty! I feel I ought to bid even though it's over. $25

sincere, blushing apologies.
I've never been much good with numbers....

I want this bag, and I especially want French Vanilla. It is 9:06 in Calgary, so after 9:30 cst. Anyway, I will get off my patooti earlier next time I see one I want. I LOVE your designs - your talent is amazing. I can't believe you don't have more followers.

Well, you I love, Jance.
(and how did you come to this site? Just out of curiosity...)
And I'm so happy that you like the designs. This was a personal favourite of mine, and I considered keeping it... but then I remembered that I already have "a couple" of darfur bags.... and one woolmine bag.... and that I want a made4aid bag...

Alison, thank you for looking out for me and pointing out the actual calendar date ;)

The bag goes to Pam, so glad to have you supporting the project.

(just a side note- I think we're all a little weary of the only national news being about the H1N1 virus. Guess what my verification word is? sinwies.

that ought to say "Janice". Only two cups of coffee into the day, and the brain is not yet lubricated.

I am going to try and stop by today! If not, then tomorrow :) Thanks Joyce!!

oh, I would have been sorely tempted to bid if I had only checked in here earlier in the week. I too have a fondness for Medicine Hat.
Beth Nickel

I'm so jealous that I missed this one...
Brown Bag? Neckties? Medicine Hat?! Where was I when this came around? (Oh right, sick with that flu...)