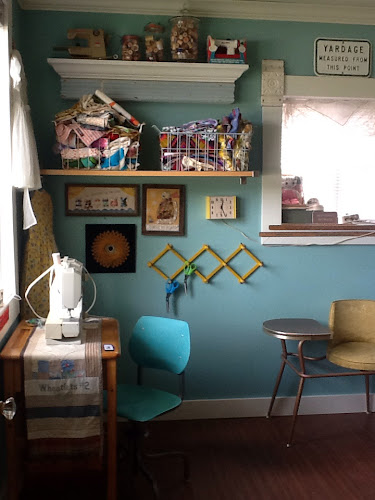 My sewing room had inadvertently become somewhat of a cluttered walk-in closet. It's a shared space: mine, and his. My side is awesome and full of colorful potential, and his has the computer, a bunch of fly-away papers, and other stuff that I don't know how anyone could sew something out of. (so, why do we keep it?!)

Truth is, my side had become impossibly cluttered with "colorful potential" and it icked me. I couldn't even sew in that room, it was much too messy. So, I'd gotten into the habit of sewing in the basement, where my piles of potential could spread even wider.

But this summer, the long-awaited reno began, and every stitch of every last thing came up and out of the basement. That was a scary time. It was abundantly obvious who had a bit of a "stuff" problem, and it wasn't him. So, I began weeding out, giving away, selling, purging. From my upstairs room alone, I sold a table, chair, and cupboard. There just wasn't room for that awesome stuff PLUS sewing. Something was gonna have to give, and I chose sewing, not stuff. (I make it sound so easy).

Last night I finished my puttering, wiping, and ditching and this morning it looks like a room I might sew in!

Here's hoping its enough to get my creativity launched from "latent" to "prolific".

Posted with Blogsy
Posted by joyce at 12:49 PM

Your room is beautiful. I have migrated my sewing area to the dining room. Where I also have spread out. When I look at it, it is clear that I have a fabric problem - scraps, leftovers, anything fabric. I love your idea to repurpose things into bags4darfur and I hope to support you in the future.

Oooo. Even I could sew there.

Looks like a lovely little space you have there. Enjoy!

Hi Michele and welcome!
I often sew in the dining room where I can spread out.

Judy come sew with me.

Linda, I would like to see your sewing space!