Baby, I Was Born For This! 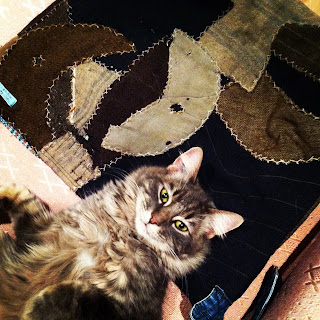 Okay.
So, that was a lot of fun.
I admit that I'd used my favorite form of reverse psychology to mentally prepare for my first ever WEST sale.  I told myself that it was only a five hour sale, and how much could really happen in five hours?  I told myself "Self!" You're probably going to haul tonnes of stuff in your rusty van to Winnipeg and set it all up and then be mildly embarrassed, standing all awkward like behind your stuff, like... "Yeah.... Look at me all weird and gamey, standing here behind all this HOME MADE crap".

And, sure.  The first hour generally feels a bit like that.  But even in the first awkward hour, I was starting to fly kind of high.  I was across the way from "JunkSalvation", and I loved her display.  I was beside Katie (HeartfeltYarrnWreaths) and she was super sweet, like yummy ice cream. I even met her mother and grandmother, who were similarly delicious.
I watched some other women haul in bags and bags of vintage clothes. I met a book binder (Andrea Davis, www.weareboundtogether.com) who planned to donate her proceeds to Voice of the Martyrs.  I mingled with Andee from Sew Dandee, and Kami (marathon1981). 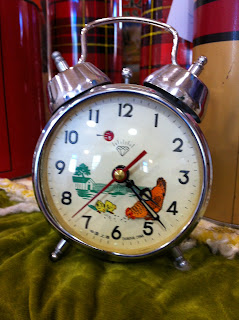 Any of you who stalk me closely (Hello, Teresa!  It was so much fun to meet you!) may remember that I have a crazy obsession right now with old alarm clocks.  Some of you may remember me weeping over a clock that I found in Brandon that was priced at $99.00.  It had a little red robin that ducked up and down pulling a worm out of the ground at every dip.  It made me weak in the knees, but I remembered about the children, and the need for milk and cheerios back at home.  Then a few months later at my local thrift shop, I saw a guy in line ahead of me buying a chicken clock for ONE CANADIAN DOLLAR.  I nearly followed him out the door to throw him into the Manning Canal and shamelessly steal the clock from him.  But then I remembered my Judeao Christian ethics and sat on my hands, duct taped my mouth closed, and hid all my sewing needles.

Good things come to she who killeth not.

Kami over at marathon1981 had the chicken clock.  For an entirely affordable $10.00.  I'm putting her in my will.  I was so excited all day about my chickies that I amused myself by occasionally winding them up and watching mama chicky peck, peck, peck away at her wee grains of wheat.  Life is so good when its simple. 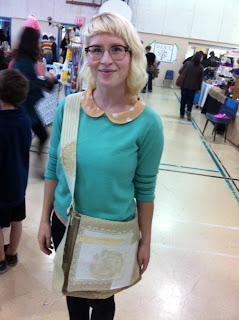 And that whole "what can really happen in five hours" theory?  Wrong, again.

I met a zillion adorable, supportive, enthusiastic customers.  There was a palpable hum and buzz.  If I had one of those wind turbines beside my table where I could collect energy, I think I could go off the grid for the entire freezing cold Manitoba winter.

Folks, it doesn't get sweeter than that.
Posted by joyce at 10:39 AM

I love your light hearted writing style, always make me smile. And good for you for a successful 5 hr sale.

congrats! that a really big number.
it was great to see you again.

Yep, you were born for this, Joycie! I loved seeing you in your element yesterday - working the crowd and working your magic. That number.... that number is amazing and miraculous and something I am SO proud of you for. Stitch by stitch, baby.

Oh sweet Joycie, I am so happy for you. The Etsy move was worth it, just to connect you to this.

It sounds like fun, but this stalker is just to far away to be dangerous.

so happy to hear it went well for you! as I mentioned on Saturday, love your writing style, love your cause!
and the move to Etsy and joining WEST will change your life --- drink the koolaid, drink the koolaid :)
please please post a link to your blog on the team forum - other westies need to hear all the good you are doing with bags!

So glad you had a great day, and got your chicken too!